A star shall fall 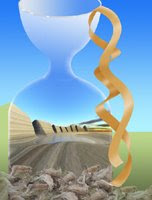 Disaster is just around the corner.
A star has started...destination earth.

Don't be anxious be alert and pray!
Posted by Jennifer Phillips at 11:51 PM No comments: 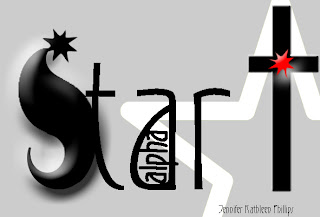 The letter t is the shape of the cross. It changes the star to start which is alpha.
Tar is a word for thank you. Christmas is a time of thankfulness for the heavenly child - Jesus.
It is also a black sticky coating for roads.
The letter a has the shape of a pregnant woman containing the Alpha.
The alpha star was tarred, coated in flesh and all the blackness of our sins and crucified. He is now the whitest of heavenly stars; the star of stars. We catch glimpses of His beauty - Now we see only in part.
Posted by Jennifer Phillips at 8:00 AM No comments: 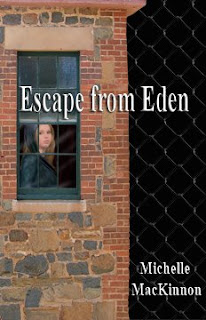 I designed the cover for my sister Michelle MacKinnon's novel "Escape from Eden" as mentioned in the NZ Herald. It was a finalist in the Indie book awards and has been taken on by the Paper Plus book chain.
Posted by Jennifer Phillips at 7:54 AM No comments: 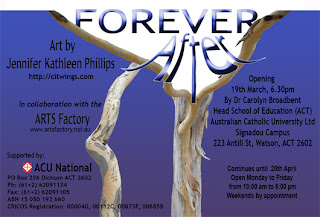 I am also exhibition 3 of my works in the Being Human exhibition in Melbourne.

More information
Posted by Jennifer Phillips at 10:41 PM No comments:

Three of my art works are featured in a lovely new Art book called "Being Human" curated by Stuart Davey, with a foreword by Cheryl Lawrie. It contains a collection of works from 27 artists.

"Being Human addresses aspects of humanity that are lost when we are bombarded with pictures of beautiful people or success stories. The artworks boldly address these unacknowledged parts of ourselves, together offering a genuine portrayal of what it means to simply be human."


For more information go to: http://www.searchingforoscar.com/project05.html

The book can be purchased for $35 plus postage from: http://www.searchingforoscar.com/shop.html
Posted by Jennifer Phillips at 8:46 PM No comments:

Be transformed by the renewing of your mind

It was the beginning of the year 2008 and as normal it felt like the holiday was too short. It was time to go back to work and I didn't feel like going. I had been very enthusiastic about work until I had a car accident in 2006. I was tired most of the time but forced myself to keep going. I began to wonder if I should just give it up. Maybe I should be doing something different.

We started the school term with two professional development days and most of us mentioned our negativity about the holidays ending, including me. The motivational speaker alluded to our negativity too: "just another week!". I thought, "more like another month or more of holiday for me!". When I got home I flopped down on the couch, tired out and turned the TV on. Well, miracles of miracles the Christian channel came on...the first time ever without me choosing it. An Australian preacher was preaching. The bible verse spoke to me and later I wished I could remember it. His words were God's words to me. He was speaking about our attitudes to wrok at the beginning of the new year and he said, "This is God's gift to you for now". I had not viewed it as such for some years! When I went back to school the next day I sat at my computer and felt weary, anxious and negative, so I reminded God that this was His gift to me. Then I thanked Him for the gift even thought my feelings didn't acknowledge this truth. Later a Christian collegue told me how sad she had been that so many had complained to her about starting back at work the previous two days. I said to her, "and so did I". Then I shared the word God had given me. That day the negative thoughts kept coming so I got out my rather rusty "sword of the Spirit, which is the word of God" (and God's word to me was, "This is God's gift to me for now") and confronted the feelings and thought with it. By the following day my feelings had come into line and some of the old enthusiasm was back.
We don't have to accept every thought that comes into our mind, or every feeling. We are in the process of being transformed and we have a part to play in it. There are practical things we can do to renew our mind. Using what the bible calls 'armour' there are times when we need to 'go into battl'. Some people call it 'spiritual warfare'. Renewing our minds is one such task. We replace some of the worlds way of thinking, with God's way of thinking.
Thank you God for your gifts and especialy for the work you have given me to do.
Posted by Jennifer Phillips at 7:09 PM No comments:

Jennifer Phillips
Jennifer completed a Teachers College Diploma majoring in Art and Maths and later completed a degree in Education (graduating in the top 5%) and a Graduate Diploma of Theology. She taught Primary level children for 8 years and then worked from home while rearing 3 children. During this time she did a certificate course in Lay Preaching, and started and supervised a licensed preschool. She spent 15 years preaching and has written songs and poems, made art works and screen printed items, self published books and jointly owned and operated a printing business, bought and maintained rental properties and been on a number of voluntary committees including including FUW, CEGACT and COACTEA. She spent some years teaching at the secondary level, Art, visual merchandising, screen-printing, guitar and IT. In 2000 she emigrated to Australia. In 2003 as well as teaching, she completed an IT Diploma in multimedia integration and became president of the ACT branch of the AFGW. In 2004 she published her 5th book, began two certificate courses (Screen + Work Place Training and Assessment) and made and exhibited her first piece of digital Art. In 2012 she retired from permanent teaching.